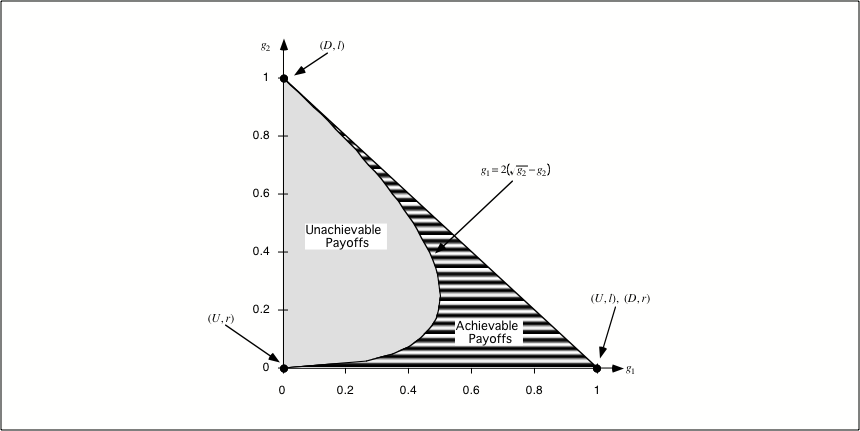 We have successfully shown how cooperation can arise in a repeated relationship where it could not in a “single-shot” context. Can other outcomes besides “everyone always cooperate” or “everyone always fink” be sustained in equilibrium in the infinitely repeated prisoners’ dilemma? What about other games? What outcomes can be sustained in equilibrium when they are infinitely repeated? The original motivation for developing a theory of repeated games was to show that cooperative behavior was an equilibrium. The theoreticians were all too clever, for, as we will see, they showed that in many cases a huge multiplicity of even very “noncooperative” stage-game payoffs could be sustained on average as an equilibrium of the repeated game.

The strongest folk theorems are of the following loosely stated form: “Any strictly individually rational and feasible payoff vector of the stage game can be supported as a subgame-perfect equilibrium average payoff of the repeated game.” These statements often come with qualifications such as “for discount factors sufficiently close to 1” or, for finitely repeated games, “if repeated sufficiently many times.”

First we will precisely define the terms feasible and individually rational. A payoff vector’s individual rationality relies on the concept of a player’s minmax value—a number useful for characterizing the worst punishment to which a deviating myopic player can be subjected in a single player—so we will define it as well. Then we will state and prove two folk theorems, one Nash and one perfect, which have the virtue of being relatively easy to prove because their proofs rely only on simple “grim trigger” strategies. Then we will prove a perfect folk theorem stronger than the first two using more complicated strategies.